Research Institute at Medical University of Plovidv
Integrative and creative 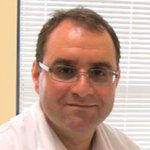 In 1999 he graduated with a master's degree in medicine from the Medical University - Pleven. In 2007 he successfully defended his specialty in General Surgery.

In January 2008 he was appointed Head of Unit at the Emergency Surgery Clinic at the Military Medical Academy-Sofia. From June 2008 to March 2013, he successfully managed the Surgery Clinic at MMA-MBAL-Plovdiv, where he developed a program of laparoscopic surgery (in particular colorectal surgery), which currently covers almost the entire spectrum of abdominal surgery.

From 2013 until now he is the Head of the Surgical Division in the newly established MHAT-Eurohospital, Plovdiv.

From February 2018 he was selected as an “associate professor” at the Medical Simulation and Training Center- MU-Plovdiv.

See all Projects open for application.